The Rebuild by Design Approach

SD : Do you think the competition “Rebuild by Design” was a turning point in coastal adaptation to climate change and post disaster approaches? If you compare this process with New Orleans after Katrina for example.

PB : I think it is a growing movement and “Rebuild by Design” was part of the trajectory in that direction. The situation in New Orleans was very different, because they had a lack of maintenance of the hard infrastructure. They also neglected, for a long time, the natural infrastructure and the result was a massive loss of wetlands.

In “Rebuild by Design”, a lot of the projects talk about “green” but I think what is more important is projects that relies on hybrid systems with an integrated ecological component.

In terms of coastal protection, I think we have to be realistic about what green systems can and can’t do. So just focusing on coastal flooding, breakwaters can reduce waves but they don’t keep the water out and that’s not possible to keep the storm out either. So first, we should ask ourselves what risk we are comfortable with, and if we just assume that things are going to get worse, what can we live with and what can we value about the coastline we already have.

People want to live near the beach, they moved here because they want to be in touch with the sea, so if the answer is building a wall, that will defeat the purpose.

We also realized that in these areas that are exposed to waves, like Staten Island, they are also experiencing long term erosion, which means their natural coastal defense is becoming lighter. In Staten Island, one thing that used to exist and protect the shore was massive oyster reefs. Those reefs will slow the water down and brake the waves impact.

So we wanted to restore that function and also restore this habitat and enhanced it because Living Breakwater is a hybrid system. We wanted to design a project that has multiple goals and multiple benefits, recreating an ecosystem and reducing risk. You have to think about the two together in constant interaction.

SD : Who do you think influenced the change of paradigm in coastline protections? The politics, the Army Corps, the Landscape architects, the environmental crisis, the Sandy disaster?

PB : I think it’s probably both ways, the influx of design in the process of coastal projects but also the fact that “Rebuild by Design” took coastal protection with a very different approach.

The Army Corps have an ecosystem restoration project, but every time they need to justify the cost for adding ecological enhancement to their risk budget, it gets cut out of the budget because they can’t evaluate it as a risk benefit.

So they’re trying to see how they can justify that it will also reduce risk, but maybe the question is not to “green the grey” but “grey the green”. It’s much easier to introduce something grey into a restoration project than the other way.

In Living Breakwater, we are trying to be about all three: risk reduction + ecology + the social resilience. But usually it’s understood that we are reducing risk first and after there is ecology… But we could also present it this way : we are creating this new habitat and it’s also attenuating waves. So we should see it as a solution that combines all of it, it’s a different way of thinking that includes all of the three.

The role of the landscape architect

SD : What was the role of the Landscape architect compared to the ecologist, the oceanographer or other members of the team?

PB : I think the role of the Landscape architect, and the designer in general, is to ask questions, and maybe crazy questions. Then you get those questions in front of the other members and they might have never thought about these questions before, because they are thinking of it through a box, and the reality is that box doesn’t work anymore.

And because Landscape architects deal with the environment and leaving things, we are kind of used to things not being exactly like our initial idea, so there is less interest in the preciousness of what we design but more interest in the process of how we design it. So if we like an idea, we try it, we experiment, but if it doesn’t work, we let it go.

In comparison with engineers that might have tried over and over to force it to work, we can build everything today. So I guess maybe a Landscape architect has more flexibility and humility, and at the same time he could always propose crazy ideas and question everything in a different way. And often what we define as a crazy idea, it’s just because it has never been done before.

SD : In France, there are very few coastal projects where they ask for Landscape architects, do you think it’s different in the US?

PB : Yes, it’s true, what this project “Rebuild by Design” gave us, is an amazing opportunity for a Landscape office. Because usually in projects, they give you a specific site where you can design in, not outside of it.

In “Rebuild by Design” we could step back and analyze the larger scale. We had the research phase and then the design phase. So each team developed a set of strategies that was distinct on 6 different sites and then HUD picked one of them. What was important about this process was that the design strategy chose the site rather than the other way.

Our project was a replicable strategy and it was very scalable. We didn’t choose the site we wanted to work on but we chose a typology of site that we were interested to work on. HUD chose for us the one they wanted us to develop further.

SD : In Rebuild by Design, Scape Studio is the only team with a Landscape architect team leader?

We should talk about retreat

SD : In France, they are studying retreat approaches, but it’s a very long process and it’s not very popular with Mayors.

PB : Yes it’s politically very difficult, it’s a very long term regional management and it’s very hard to do in the US with our system. But I think personally, we should be talking more about that.

One of my critiques about the “Rebuild by Design” is that we spend so much time zooming on the neighborhoods that were affected by Sandy, but sea level rise is way bigger and it will affect a way wider coastline. So we should talk about retreat.

New York City is a city of 8 million people, it’s probably going to have 9 million people and the water will get a foot higher in 10 years. They should do more regulation, stop developing. All the higher regions in Brooklyn are also regions that are historically more rich. How can we encourage people to live in higher places, which will be denser ? We call it “safe grow”.

Building investment among a diverse group of people

SD : How will you define your relationship with politics? Do you think this type of approach is too dependent on the politicians who order the project? What happened when the politics changed, Trump versus Obama? How can we make this approach more durable over time?

PB : I think it’s linked with the emergence in the interest in resilience. We need to create multipurpose projects, the age of a single purpose infrastructure is over. We don’t have enough money so everything that we build needs to do five things instead of one.

If you have one strong idea, you might have people who like it and people who hate it, so if a designer has one very singular idea, we can say it will be a less political resilience idea. But when you have a project with multipurpose ideas, then people will connect to the project in very different ways.

Like kids who live in the neighborhood, they will be interested in the project because taking care of the oysters is in their school program. With a multipurpose project we can have a broader purpose with more co-benefits but also more political resilience because more people are invested in it.

Understanding how a project is viewed by different stakeholders and how it relates to their values is essential. We are actually working in a neighborhood where there are a lot of Trump supporters, with a Republican consultant, but he likes our project. We have to make it nonpolitical and more valuable.

SD : So you can have a stronger approach in projects if you involve more people in it, because they will defend it?

PB : Yes, I think it’s essential, as designers we won’t be there everyday living with the project, and so building a sense of investment and trust among a diverse group of people, that becomes very important.

SD : Do you think people are more aware of the risk today?

PB : Yes, one thing is to remind people that we can’t stop storm surge, it’s a reoccurring risk. And the other thing is that erosion is not so visible, people who have lived there for fifty years know that the beach was way wider, but the new population doesn’t. So there was a lot of work revealing the history of the site, just so people will be more aware of the site they live in. So it made people aware of the risk but also gave people a broader perspective in time.

SD : How do you think people consider climate change today, in terms of the risk for their site ?

SD : Do you know of any other projects in the world that have a similar approach ? I think that most of these approaches are unfortunately developed in Occidental countries, so what will happen in the other ones?

PB : Well, to have a landscape solution based on natural systems, it takes a huge scale, we need a large scale so we can see the difference. We need a lot of projects to be able to see a positive impact, and that’s a challenge.

But sharing the visibility of these projects and their success over time will be very important. We need to document them and also moderate them, explain how they work, how to maintain them, how they perform. We need to talk about that.

SD : Thank you so much for taking the time, I hope all these ideas will migrate to France.

PB : Yes, I think we need change, change in our way of thinking about climate change, but also in the way we create projects as designers too. But it’s a slow process. 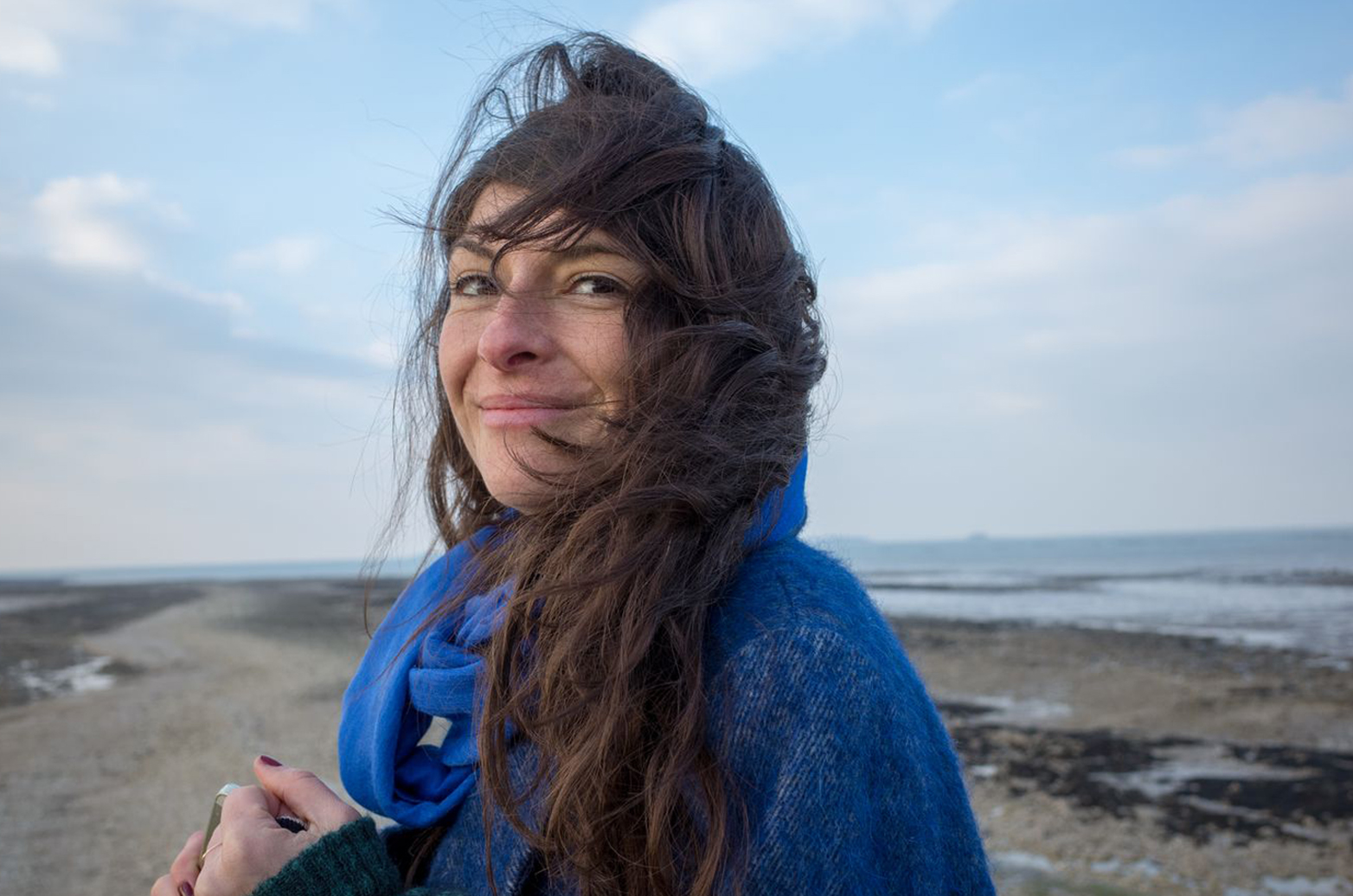